$100 OG, an original OG phenotype, as expected, has well-balanced effects. Users who have not tried it shouldn’t discount the weed as a gentle type, though. With a toke or two, it can put enjoyers in a mild couch-lock while soaring in cerebral skies. Every penny spent on this mean puncher is truly worth it.

The marijuana initially popped up around the streets of Hollywood. Nameless at first, it earned such moniker because of its strength and expensive price tag. Despite being heavy on the pocket, this winner never stopped amassing loyal fans. Both recreational and medical users cherish its mind and body benefits.

Why keep buying this hard-hitting bud, though, when a whole stash of it can be grown instead? Uncomplicated to cultivate, even beginners can try their luck with this skunky delight. With it in the growery, one can enjoy a year-round supply without back-breaking efforts.

Unlike many OG strains, $100 OG doesn’t have a lemony oomph. It has a rather more mature essence that veterans simply adore. The bud itself reeks of skunky and fuel-like scent. Once broken apart or combusted, the aroma will get even more pungent.

The herb’s strong fume also pleases the palate. As the smoke gratifies with its skunkiness, it also reveals some nutty and pine flavors. What surprises its users the most, though, is the dash of sweet Blueberry it gifts.

$100 OG hits straight to head first. Almost immediately after the first bowl, the feeling of euphoria can’t be in any way denied. With this weed, one will learn what being in seventh heaven truly means. Then, while floating in a cloud of bliss, the user will also feel inspired as ideas after ideas breeze in. 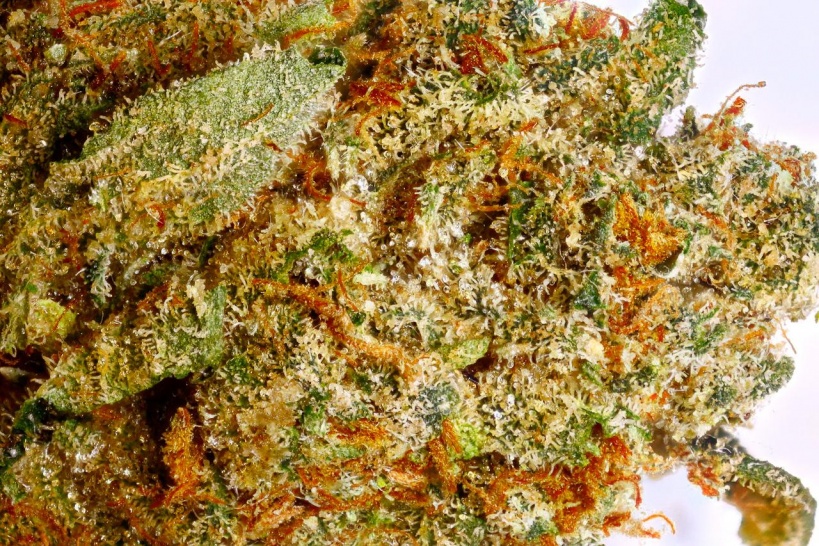 Enjoyers can channel their creative concepts into action. However, this is only possible if it involves subtle movements. A few minutes after the initial toke, the marijuana’s soothing caress lands at the back of the head first. Then, it’ll travel its way down to the rest of the body.

The good news is, cannabis fans who want to stay moderately active will able to do so with $100 OG. Attending to some easygoing endeavors or hobbies is very much encouraged. One can also enjoy some merry time with family and friends. Consuming the herb during work hours is a big no-no as it puts the body in an almost couch-locked state. The heavy feeling can make one unproductive.

The kicker is best used by veterans for an afternoon smoke out or an early evening chill. It’s important to know, however, that a tad bit more will cause its Indica content to be more evident. Complete physical sedation will manifest. Then, a journey to dreamland will soon follow. For an experience that gives the freedom for light movements, keep it low and slow with $100 OG.

Not the best weed for beginners and THC sensitive users, $100 OG may cause psychological hyperactivity. The fortunate ones may just feel dizzy. However, others may experience heightened paranoia or anxiety.

Additionally, cases of cotton mouth and dry eyes are typical too. These two offshoots are pretty common when consuming any cannabis variants. To avoid or remedy them, drinking plenty of fluids and taking in moderate doses is the key.

The many benefits of $100 OG’s well-balanced effects gave it a huge loyal following. Even medical users are able to reap the advantages of its use. This strain’s medicinal value serves people suffering from several mental and corporeal conditions.

Due to its euphoric kick, those battling the likes of anxiety, depression, and stress get to free their minds of psychological burdens. With only a small toke or two, the blissful feeling boots out the negative emotions and thoughts. One gets to enjoy out-of-office hours without a heavy mental weight.

Additionally, ADHD patients benefit from its calming and focus boosting effects. Whereas Insomniacs attain a restful sleep due to its sedating influence. The herb’s aid to people with abnormal or disrupted eating patterns is also valuable. Under its influence, nausea and vomiting stop, and munching becomes irresistible.

Sufferers of chronic pain can also count on $100 OG to provide relief. It is effective in appeasing the misery caused by ailments such as migraines, PMS, and backaches. It is not advisable for individuals suffering from extreme physical pain, though. The moderate strength of its antispastic and analgesic properties work with mild maladies.

Cultivating $100 OG is not as complicated as handling other variants. It has thick, sturdy branches that can endure heavy weights and quite forceful winds. Not the kind with many stems, the minimal number assures less pruning and trimming.

The beauty has flowers densely populated with popcorn-like buds. Thickly covered with trichomes, it teases onlookers of its glistening potency early in the flowering stage. Of fluffy upper foliage, its lower limb is almost leaf-free, so air circulation is never a problem. Although the charmer does not stretch tall, it is important to note that it needs wide spaces to branch out.

In a favorable indoor setting, the plant can produce up to 350 grams per square meter. Aptly nurture it as it flowers for nine weeks and adopt a SOG setup to achieve its maximum yield. The flora can also grow lavishly outdoors in a Mediterranean-like climate. Should one’s location may not be as ideal, such as those in northern areas, proper timing is the key. Planting around end April until late May and harvesting by October is the most optimal.

Have you grown or used $100 OG? If not, would you like to get your hands on this strain? Please leave a comment to let us know what you think. We want to hear from you.